I hope you are all well after a wonderfully warm summer and the very sad period of mourning for Queen Elizabeth II.

We had a wonderful summer in Gaucín this year, and the Feria finally took place on the first weekend in August after a 3 year induced absence, so you can imagine how busy and popular it was. The village was beautifully decorated with coloured streamers and beautiful colourful crochet work to give much needed shade in the streets. 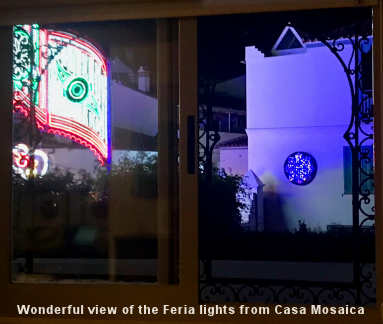 Throughout Friday and Saturday there are more bands marching and playing in the narrow streets and much jollity and on the Sunday a huge free paella in the Pavillion for everyone. Lots of horsemen competing for an award for the best presented turn up looking rather wonderful and ladies and children in their flamenco dresses riding dodgems. It’s all very jolly but we don’t rent the house during this week as you can imagine it is fairly noisy!

The celebrations don’t stop there. A couple of weeks later on the last Sunday in August it was the Romería del Santo Niño, the pilgrimage of the Holy Child. The image of the Holy Child is taken in a very slow procession from the church to the site of his supposed apparition in 1536, now a hermitage in the countryside, for a wonderful flamenco mass followed by dancing, singing, eating and drinking until dawn.

This year we were able to attend part of it for the very first time. It was absolutely delightful and everyone is welcome. The Procession left the church at 8.30am, we joined some friends and set off walking a little later down the “Camino de Gibraltar,” the old smugglers route between Gaucín and Gibraltar, below the Fructuosa and on…..and on… steeply down the hill.

We soon caught up with the procession who were making their way slowly and as it got warmer, stopping for breaks and sharing the load amongst themselves, in any shade available. Some country houses we passed on the way down provided welcome cold drinks for the pilgrims “Romeros” at their gates. There were lots of families, some with young children dresses in traditional clothes and of course plenty of horses.

As we reached the hermitage there was already a large gathering, many less mobile villagers having been driven down by the town hall, it was crowded out. The flamenco mass (Rociera), sung by the choir in red was absolutely wonderful, it was hard to stand still. The bar was open, jamón, pinchitos, tinto de verano, fino etc were served…while another free for all paella was prepared.

The ascent back up to the village was not starting until 18.30, so we decided to catch a lift in the kindly provided town hall bus while it was still quiet, we were very grateful not to have to walk up that hill as it was still quite hot!!

The Novena is the following 9 day period when service and mass is celebrated in the evenings at the castle chapel for 7 days and then the Santo Niño is moved back to the church. There is more processing through the village on various days culminating in a solemn procession through the village on the 8th September, when house owners along the route are invited to decorate the front of their houses for the passing of the procession. Do look at my January 2020 newsletter for photos of this. And it all ends on the Saturday night with a party in the Plaza with live music.

The Fructuosa has a new chef as of September 2022, Michelin starred chef Michael Riemenschneider. Very exciting and longing to try it when we next get back. 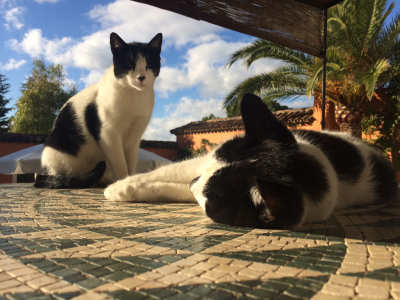 I leave you with these pictures of the plumbago in full flower at the end of August and the 2 wonderful new paintings from Art Gaucin artist Jenny Collins from this year’s Open Studios. As well as this naughty photo of Kevin & Geoffrey taken by a guest!

We hope to welcome you back to Casa Mosaica soon, dates are now available for 2023.

Very best wishes to all from the Casa Mosaica team, Emma, Ruffi & Raffael.