I hope you have all had a relaxing summer. We have had a super holiday season in Gaucin this year with lots going on in the village which was made especially decorative by the local ladies and their sewing group who celebrated “Semana Cultural” in the village with this pretty “crochet art”....creating stunning areas of colour and shade in the village. 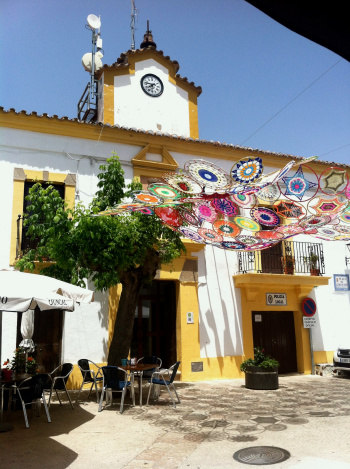 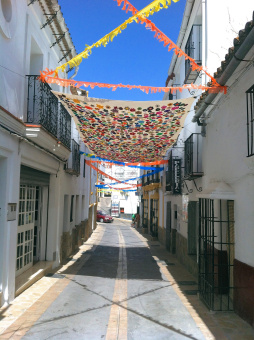 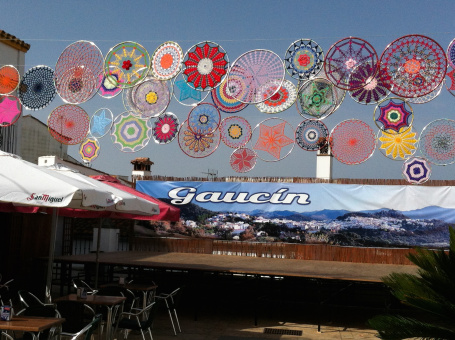 Part of the Cultural Week was free evening of music and dance on a stage outside Casa Antonia. All the ladies in the dance group were from Gaucin or Algatocin. This dance was wonderful. 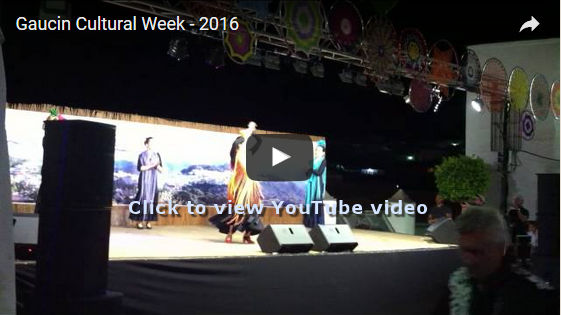 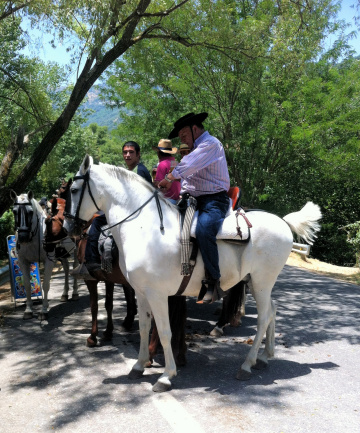 Throughout the Summer in the villages of the Sierras, Romerías (religious pilgrimages) take place. Although it is a Catholic Ceremony, meaning “Those travelling towards Rome”, they seem to have a lot of fun taking their Saints out of the church on a float and to the Hermitage for the day, which starts with a mass. This year we went to the Algatocin Romeria, which takes place down on river Genal. Horses and riders gather, in this case around the one local restaurant where there was live music and dancing, everyone dressed up while most of the young were cooling off in the river. Later there were fun competitions on horse back. Everyone is welcome so they are an interesting experience for visitors to see and join in a little local culture. Details of local events can be found on the much improved www.gaucin.com site. 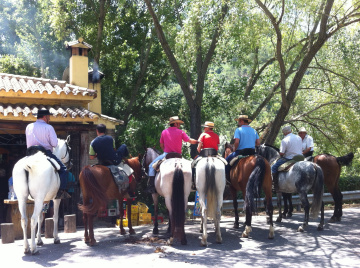 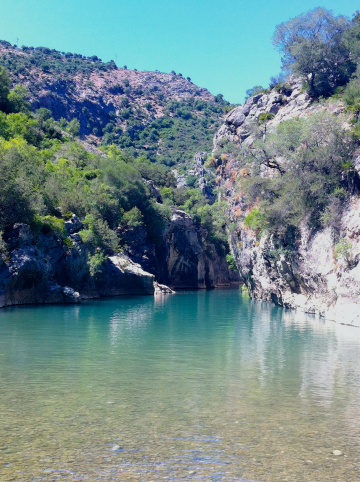 When I have guests to stay in the summer, I often arrange a picnic in the Gorge of the Vultures. Some Casa Mosaica guests will have made the trek and know how beautiful it is when you get there, and worth the 40min walk in blistering heat to swim in what is known as the Moorish Pool (Charco del Moro). Although you cannot see it in this photo “Mr. Henderson’s Railway” runs through this gorge... You may have seen the Portillo program recently on British television.

This section of railway from Jimena de la Frontera to Ronda was opened in 1892. The line continues to Bobadilla from where the track meets the main line to Madrid and the gateway to the rest of Europe. The mastermind behind the railway was a British engineer called John Morrison, backed by his wealthy friend Sir Alexander Henderson, later Lord Faringdon. 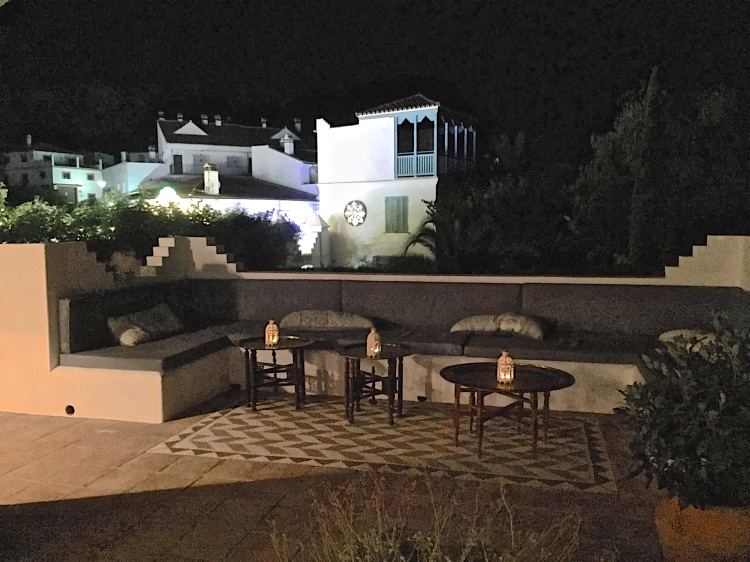 Casa Mosaica upstairs terrace on a hot summer night with Feria (Gaucin summer festival) going on just outside in the street. On the opening night of the Feria, outside La Caita we were treated to a display of horsmanship by this beautiful horse and rider. 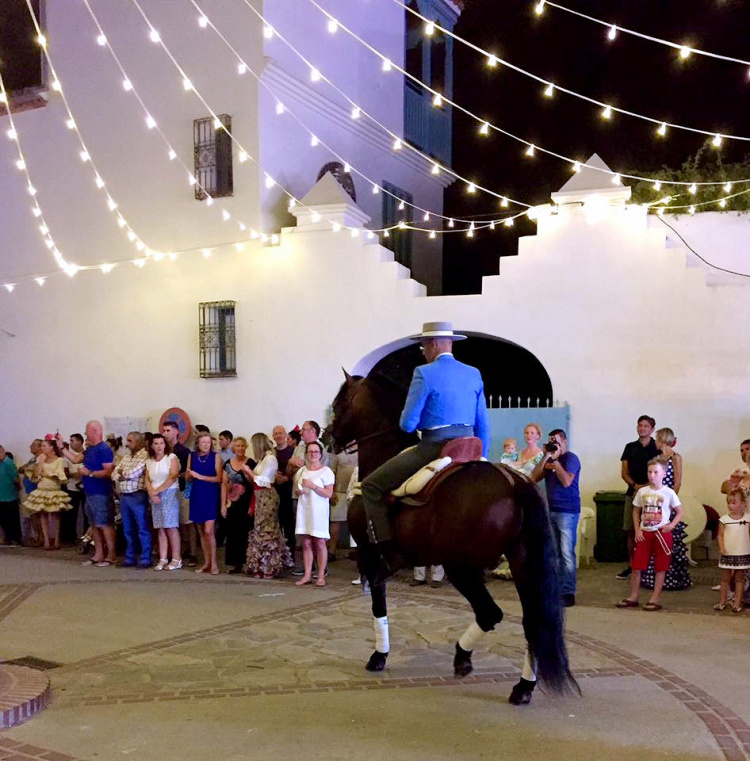 This summer I have been walking most mornings from 08.00 and enjoying a delicious “Andalucian” breakfast of toast with garlic, olive oil, fresh tomato and a good cup of cafe con leche before getting started on the rest of the day. There are plenty of delightful walks starting from Casa Mosaica, catching glimpses of the various wonderful views. 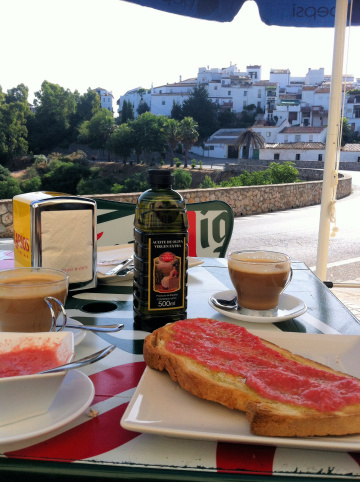 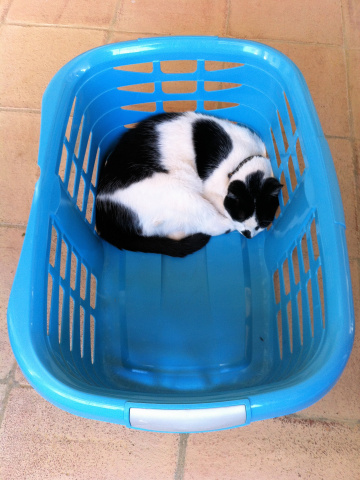 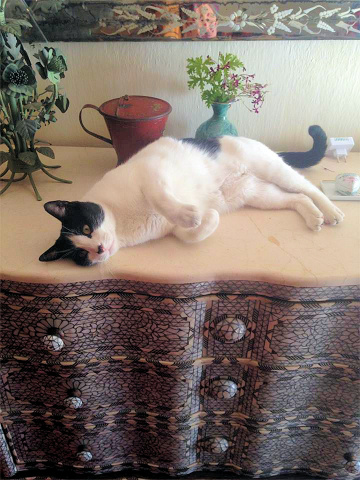 Thank you to all the loyal guests who came back to Casa Mosaica this summer, it’s always nice to see you, and welcome to those who came for the first time this year and are still to come in September and October. Returning guests would always get priority for their preferred weeks in 2017 as long as I know well in advance.

Thank you for leaving nice messages in the house book, which I can use for my site: I’d be very grateful to any body who would write a review on trip advisor, just follow this link. 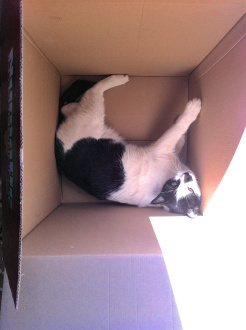 I sign off with some photos of Kevin and Geoffrey...Geoffrey snoozing in some unusual places.... a cardboard box and the washing basket and Kevin, caught red handed, by a guest on the chest of drawers in the master bedroom, very naughty!!

Best wishes as usual from,
All the Casa Mosaica team, Emma, K & G.